In South Africa (as I suppose in the UK) we use a sandwich toaster to toast our cheese sandwiches.  In the USA however, they use mostly cast iron skillets to fry them to a golden brown, or so I've been told.

A grilled cheese sandwich is something that is taken very seriously in America.  I found this on wikipedia.org:

"At the Grilled Cheese Invitational cook-off, held annually in Los Angeles, contestants attempt to cook the best grilled cheese sandwich in various categories. The 2008 winner of the Grilled Cheese Invitational "Spaz Trophy", awarded for overall "weirdness", was the "Cake and Mivens" entry, a dessert grilled cheese sandwich that featured the marshmallow peeps confectionery.

On November 23, 2004, a grilled cheese sandwich containing a supposed likeness of the Virgin Mary was sold at auction for $28,000. "Discovered" in 1994, it had remained free of mold for ten years because the butter and oils used to make the sandwich retarded its development.
According to Woman's Day, April is "Grilled Cheese Sandwich Month."
My favourite way of doing a toasted sandwich is still using the "flat" sandwich toaster.  They are hard to find these days though.  The newer "snackwich" toasters turns your sandwich into a jaffle.  Nothing wrong with a jaffle but for me the whole purpose of a toasted cheese sandwich is the cheese that oozes out and becomes crispy on the toaster.  As a kid I always tried to sneak off with the sandwich with the biggest piece of crispy cheese! 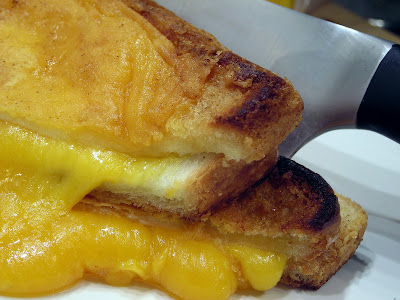 My inside-out, or maybe inside AND out cheese sandwich has crispy cheese on the outside, just the way I like it.  It is guaranteed not good for your diet, but man, does it taste good!  I don't have a cast iron skillet, so my trusty non-stick pan from Ikea had to do the trick.
Inside-out Grilled Cheese Sandwich
Ingredients: 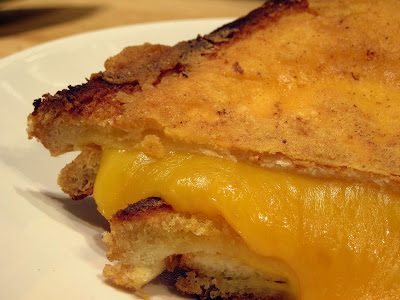 Method:
By all means dress it up with some good ham, tomato or anything else you feel like, with a salad on the side.  And if you feel like adding marshmallows like the people in L.A. - don't tell anyone it was my idea!
Email Post
Labels: cheese grilled cheese light meal sandwich toasted cheese