As South Africans we  pride ourselves in our braai heritage.  It is a part of who we are, whether we are black, brown or white.  We all braai.  We even have a semi-official "Braai4Heritage Day" on 24 September every year.  There is also a certain sense of ritual and tradition attached to braaiing.  The men are all outside, gathered around the fire (usually discussing rugby or politics), while the women are inside making the salad.  Traditionally the men braai, not women. Also, the person braaing shouldn't be interfered with.  Under no circumstances should you fiddle around with his fire or turn his meat, unless you've been given permission to do so.  The only time a woman gets involved with the actual braaiing process, is when asked by the braaier, "Mamma, kom kyk net gou-gou of die vleis gaar is!"  (Honey, please check if the meat is done!)

The South African expat community in Taiwan loves a good braai now and then.  We try and keep it as close to the original as possible, although most call it "barbecue" now, so that the Taiwanese wife will know what they are on about.  In keeping with tradition, the men still braai, although not in the back yard.  As few of us live in an actual house, the balcony or rooftop of the apartment building has to suffice.  There is also no such thing as "braai wood" or handy Blitz Firelighters, so most Saffas use charcoal or gas braais.  We are lucky to have a local supplier of good meat and boerewors in my friend, Steve from Tainan.  He is a South African who makes really tasty boerewors and even biltong.  What's even better is that it is delivered right to your door!
We are by no means alone in our love for cooking meat over an open fire.  We all know that the North Americans love their barbecue (cooking burgers, hot dogs and ribs) and the Aussies have their "barbie".  Even the Brits (maybe thanks to Jamie Oliver) have now discovered the joys of braaiing. 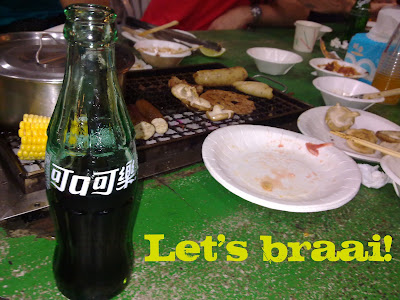 In Taiwan there is also a tradition of barbecuing.  It happens every year on the day of the Mid Autumn Festival, also called Moon Festival.  It is held on the 15th day of the eighth month of the lunar calendar.  It is interesting to note that the tradition of barbecuing during this festival, isn't followed in China.  Apparently it is uniquely Taiwanese and has its origin in the 1980's when a clever TV commercial by a BBQ sauce company, urged the nation to barbecue, while admiring the full moon on this festival...using their sauce, of course.  The rest is history!
Also noteworthy is the fact that it is usually the women that do the barbecuing in Taiwan, while the men relax, Taiwan Beer in hand.
This brings me to the Taiwanese BBQ Restaurants.  On Friday, the lads at the office decided that it was time for some R & R and we decided to go to one of these restaurants.  Now, if you like the social aspect of a fondue with friends, you'll love these restaurants.  You sit around a table with a braai in the middle and each person braais what they like.  Our restaurant (The Lion King...yes, kid you not) consists of a huge outdoor space, under a veranda.  There are display freezers and fridges  against the back wall, filled with anything you can think of.  The beef, pork, chicken and even ostrich were my favourites.  If you are a lover of the fruits of the sea, you won't be disappointed.  Any kind of (previously) living thing from the ocean is there for you to baste with some butter, squirt with lemon and drop it on the grill.  If you like veggies imbued with a smoky favour, you have the choice between miellies (corn on the cob), green, red and orange sweet peppers, Asian egg plant and a wide variety of mushrooms. 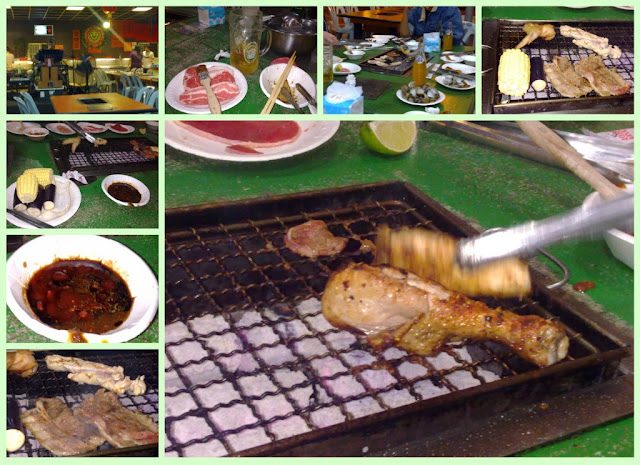 The meat is cut really thin, so that it will cook in no time and just like with a fondue, you braai and eat, braai and eat and have a good couple of beers, too.  Everything you might need is provided for you, from paper plates and bowls, to sauces, salad stuff, brushes, foil, fruit...everything!


Everything was of a good quality and the barbecue sauce was really more-ish.  It was also my first time to try rice sausage.  Yes, the Taiwanese love rice and even stuff sausage casings with glutinous rice and the grills it on the barbecue!  It had a nice, crispy skin and the inside was soft and sticky and reminded me of a sticky toffee pudding, without any sweetness.  The smokiness of the rice sausage made me forget that I was eating plain old rice.  Something else that was quite special, were the chicken testicles and Pope's Noses.  I know my dad would've loved braaied Pope's nose, but he probably would've given the testicles a miss, as did I.


The best thing about an evening at The Lion King is the price.  It is only NT$299 (R66.00) per person for eat as much as you like, soft drinks included.  For an extra NT$99, you can drink beer until you fall over!  All in all, not a bad night out with friends and family for R88.00 a head.
If you want to order boerewors, droëwors or biltong, you can call Steve at 0987690902.
Braai4Heritage: http://braai4heritage.co.za/