Sosatie (pl sosaties) is a traditional South African dish of meat (usually lamb or mutton) cooked on skewers. The term derives from sate ("skewered meat") and saus (spicy sauce). It is of Cape Malay origin, used in Afrikaans, the primary language of the Cape Malays, and the word has gained greater circulation in South Africa.  - Wikipedia.org
Sosaties have been in our food tradition since the days of the Cape of Good Hope,  probably brought to the Cape from the island of Java.  In its most basic form, it is skewered meat, marinated in a curry sauce.  Traditionally mutton or lamb is used, but beef, pork and chicken can be used too.  They can be cooked in a pan, or in the oven - under the grill.  However, most people will cook sosaties over moderate coals as part of a South African braai.
Every South African braaier worth their salt has their own recipe, with a little more of "this" and a little less of "that".  See what works for you. 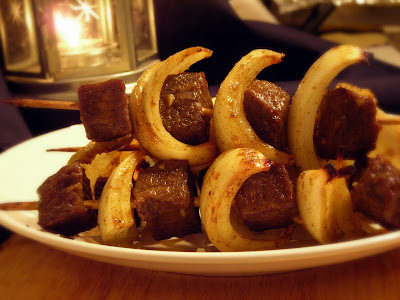 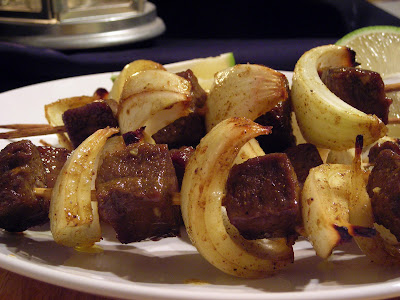